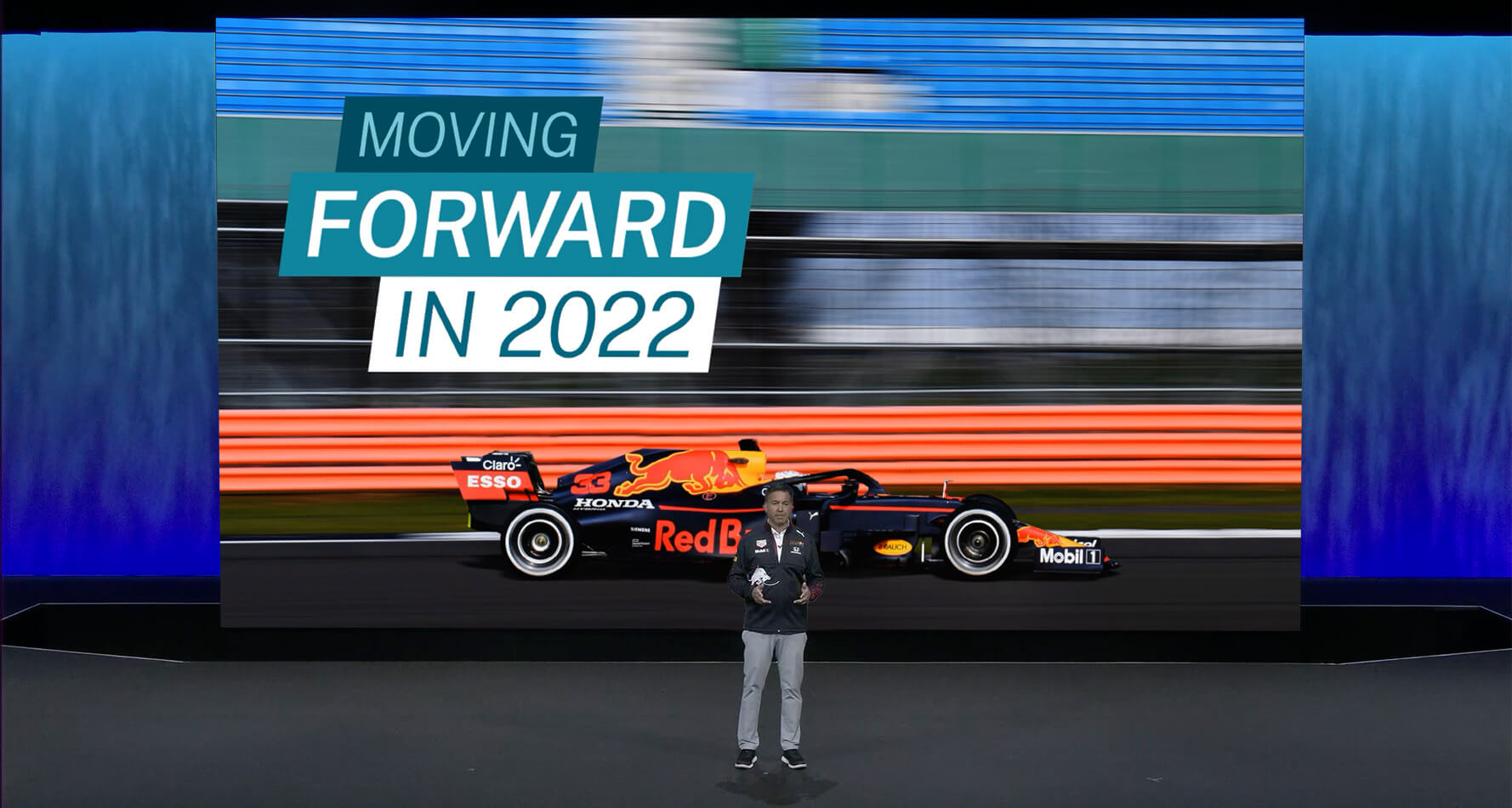 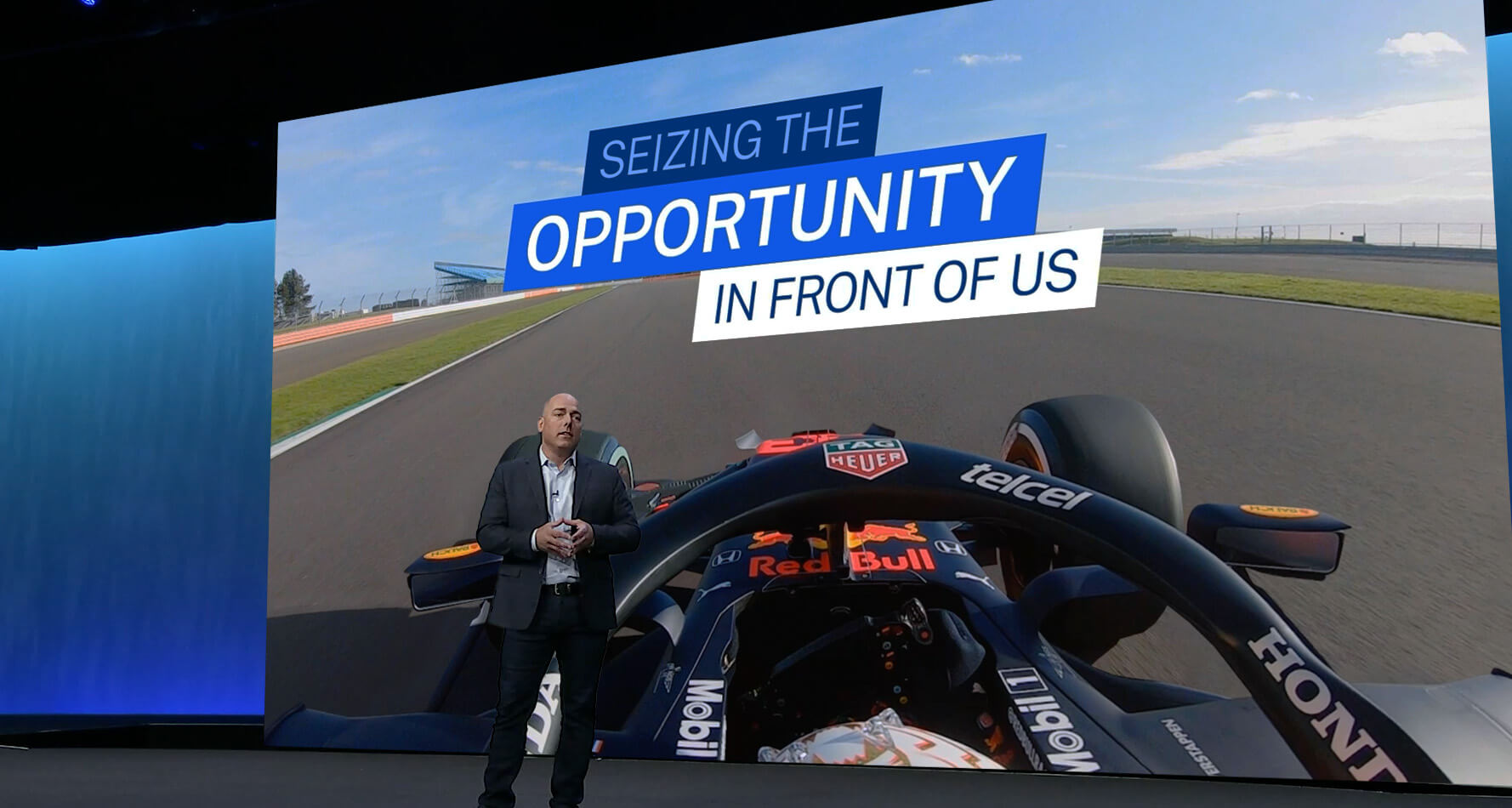 For Citrix’s 2022 field kick-off event, leadership wanted something new and different from years past, both in terms of the content and the creative look and feel. To deliver that Willis Collaborative leveraged one of Citrix’s premiere sponsorships with F1’s Red Bull Racing team, bringing a racing-inspired theme to life through high-energy openers, titles, and interstitials, while pioneering a new 3D parallax technique within editable PowerPoint presentations to deliver astounding show graphics. Here’s a rundown on what we did:

Adopting a theme: One of Citrix’s largest sponsorships at the time was with F1’s Red Bull Racing team, and conveniently team driver Max Verstappen was poised to win the championship when content planning for the event began. Working with the CMO, Chief Customer Officer, and comms team, we mapped core themes of Red Bull Racing’s year against the must-have ingredients for the field kick-off and agreed that blending Red Bull’s racing motif in both words and creative with Citrix’s “work from anywhere” themes would be an exciting approach for the event.

Building a narrative: Willis Collaborative was responsible for content and creative across two main keynotes, two partner keynotes, two regional keynotes, and two closing keynotes (one for sales and one for partners). Getting to the finish line took an incredible amount of collaboration with stakeholders across Citrix’s business. The heaviest lifting came for the two main keynotes where we helped Citrix leadership reimagine the agenda for both, drafted content for senior leaders, coordinated product demos, and worked to wrap much of the content in racing-inspired wordplay aligned with business goals.

Video that feels like you’re at the race: Willis Collaborative had to produce a wealth of video content for the event, including keynote openers, titles and product demo videos. To do so we leveraged Red Bull Racing footage Citrix was licensed to use, dressing it up with a fast-paced, racing-inspired creative treatment that married core aspects of Citrix’s brand. One of the most important moments of the event, and the content that required the most emphasis, is when the Chief Customer Officer reveals the sales priorities for the upcoming year. To spice each of those up, Willis Collaborative wrote short scripts for each sales priority, hewing to common racing language, which Red Bull Racing drivers Max Verstappen and Sergio Pérez where gracious enough to record. Using the footage, combined with some stellar Red Bull Racing visuals, we produced four interstitials which were played as each sales priority was introduced. Below we’ve included the main keynote opener and title example, and two of the sales priority interstitials.

Taking PowerPoint to new levels: Anyone familiar with keynote graphics knows the trade-offs involved with formats. PowerPoint provides relatively easy editing near showtime and a format that can be easily packaged for use after an event but can be creatively restrictive, while more niche solutions for large-scale keynotes can alleviate creative restrictions but making editing and re-use difficult. For Field Kick-off 2022, Citrix wanted jaw-dropping keynote graphics, but the ability to edit and re-use content. To address this, Willis Collaborative developed a novel way to use 3D objects within PowerPoint to provide a parallax effect. When applied to the stunning Red Bull Racing photography, and even to “work from anywhere” scenes, the effect added subtle motion and depth to photos that provided an immediate wow factor. The approach easily allowed for editing up until showtime and after the show graphics were flattened so that decks could easily be reused by sales and marketing teams where needed. The last video in the carousel below shows some examples of these graphics. The parallax effect has been sped up 3X here so that it’s more apparent.

Willis Collaborative developed a novel way to use 3D objects within PowerPoint to provide a stunning parallax effect that provided an immediate wow factor to keynote graphics.